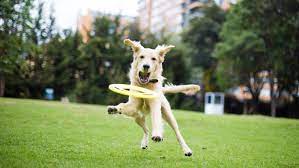 Regardless of size or breed, dogs love to play. Watch your fur babies engage in play and you will often wonder if they are playing or fighting. Dogs will often rear up, hip check or slam, bounce, mount, stand, bite, growl, bark, or bare their teeth. Rough play may seem but multiple animal behavior hypotheses refer to the social play as “dog play fighting”. Do you know why? Although it may seem real and violent, take a closer look and you know it’s the chase that they love to engage in. Do you often wonder if the amount of play is affecting your pet’s behavior? Are they developing anxiety or becoming more loving and calmer?

Revealing the importance of dog’s play

A recent report released by Bristol University claims that daily play is directly proportional to the well-being of dogs, quite like humans. The study revealed that dogs who don’t engage in a lot of play often suffer from behavioral issues such as anxiety and aggression. Canine play is a common language for dogs and dog owners must encourage their pets to play.

Not-so-obvious but dog’s play has a science to it and here we decode it in simple words:

Playing helps your fur babies gain important motor skills. Behaviors such as rolling, jumping, and shaking increase their mind-body coordination, balance, and awareness levels. Their playtime also helps them to learn how hard they can bite or growl without scaring their play partner. Soon they develop the ability to communicate with other pet friends or masters. Often expressed as aggressive, these intense play sessions also release hormones (oxytocin and cortisol) in the dog’s brain that controls their stress and happiness levels. Dogs that are encouraged to play from a tender age often equip themselves better when startled or knocked off balance.

Check out our awesome food range!

Canine-Canine play also unleashes a different side of the dog’s personality. When to get aggressive, when to become submissive through the intense play session determine their social bonds. While playtime is a pure fun time for them, it improves social cohesion and familiarity in your pet pups. They understand body language better and learn to interact closely. Some dogs love to play rough. They are more enthusiastic and often appear more aggressive than they are. However, through their play session, they develop a comforting friendship with their playmates that grows only deeper and stronger.

Physical fitness certainly but dog play also ensures mental fitness and agility in dogs. Perhaps the importance of mental well-being for pets is equally critical for their overall health and behavior as their human friends. It stimulates their senses and they learn to get more receptive and interactive through their play sessions.

Dogs that play together often, start on an intense note, slowly moving towards friendly rituals of fun and playfulness. Occasional snarling, biting, or pinning down is common. It is their way of establishing a social hierarchy of sorts determining the comfort of their dynamics. Encourage them to play more with other pet dogs such that they build positive experiences and healthy social interactions. Let’s get started on pup playdates!

previous
Four vet-approved tips for choosing the best food for your senior dog.
next
How to Start Dog Obedience Training -Posh Puppy