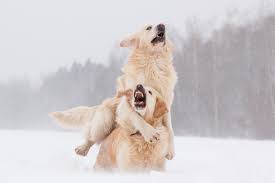 A golden retriever paces in and out of your home garden, chasing, nipping, tackling, skidding and sliding, only to repeat the performance over and over again. Does that situation sound familiar? Well, if you are a pet parent, you will know it. Dog play may seem like a fun activity, a joyful waste of time to interact or fight with their pet mates but there’s often more than what meets the eye. Could the goal simply be pleasure? Or is there a biological reason that dogs love to play?

Dogs engage in play to communicate under a moral code, that is not simply to establish dominance. Research studies in the past show that dogs’ behaviour during play is a language of its own, and every shift of the eyes or wag of the tail is a form of communication.

Dog Play also has a set of rules. And if one of them breaks the rule, they are most likely to be excluded from the group. It suggests that dogs experience a range of emotions when they enforce moral conduct and also recognize these emotions in other canines.

Let us understand the science behind the different play behaviours of dogs.

Playtime has immense health benefits for dogs too. A recent report released by Bristol University claims that daily play is directly proportional to the well-being of dogs, quite like humans. In fact, the study revealed that dogs who don’t engage in a lot of play often suffer from behavioural issues such as anxiety and aggression.

Dogs have relatively longer periods of juvenile development than other animals like cats or rats. They appear to play more frequently not because they enjoy it more, but simply because they grow at different rates and in different ways

previous
Does your dog have Asthma?
next
Itching in Dogs — Common Causes, Symptoms and Remedies